Mystery of the Batwoman

Injustice: Gods Among Us 2 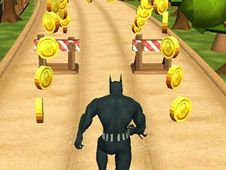 What is Batman Subway Surf?

We've had plenty of Subway Surfers Games online added on our website so far, and that's a given, but despite the fact that we've been to many places with this series, we don't think that ever before did you have the chance to play a game where Batman, the DC Superhero, is the one surfing, and that is precisely what you get right now with the awesome game called Batman Subway Surf!

Can you surf the subways with Batman and complete all the courses?

As Batman runs forward through the courses, you will use the right and left arrow keys to duck obstacles but also grab as many coins as possible and get a big score in return. Don't hit into the obstacles too much, because if that happens, you are caught up by the tribesmen chasing you, and you will be eaten as their soup!

Some obstacles need to be jumped over, something that you do when you press the up arrow key, and under some, you need to slide, and for that, you press the down arrow key, simple as that. Good luck, enjoy, and make sure to stick around and play even more games with Batman as only here can be found!