The Mitchells vs The Machines Jigsaw Puzzle

Over the Moon Jigsaw Puzzle 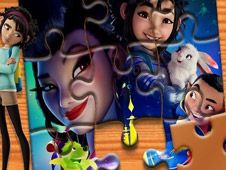 What is Over the Moon Jigsaw Puzzle?

One of the most celebrated animated movies of last year, which even got nominations for both the Golden Globes and The Oscars has come from Netflix, and it is an animated film called Over the Moon, which is a musical film where a girl builds a space rocket in order to fly to the moon and meet a goddess.

We've not had any Over the Moon Games online added here before, but we do now when you're invited to see amazing screenshots from the film by solving puzzles with those pictures, in the awesome game called Over the Moon Jigsaw Puzzle!

Come have fun by solving puzzles with Over the Moon!

This game features a total of 12 puzzles for you to solve, but the first six of them are unlocked, and you need to solve them to unlock the other six as well.

You can solve them in either the easy, medium, or hard levels of difficulty, and depending on your choice you will have a different number of pieces to the puzzle.

Use the mouse to pick up the pieces that have been scattered around, placing them over the transparent image where they match it, and when they fit with one another and all are in place, you will have a complete picture.

Start now, have fun, and stick around for even more fun that is yet to come!