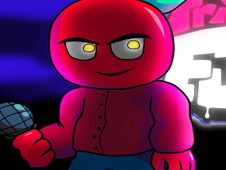 What is FNF vs Corren?

Corren is a man who has a head that looks like an apple, and when Boyfriend bumps into him on the street, he realizes that he is his best friend from seventh grade, so for old times sake he is going to sing duets with him, something that you get to join in right now and here with this awesome new Friday Night Funkin mod called FNF vs Corren, where you've got no less than three original songs:

Can you sync up with Corren and sing the best songs ever?

Corren will stay on track and sing according to the charts, and you have to do the same in order to get your parts right and the whole song, with you aiming to reach their end and turning the progress bar in your favor, simple as that.

Well, when you see arrow symbols above BF are matching with one another, press the same arrow key on the keyboard to hit the notes properly, and be careful not to miss, since too many misses in a row mean losing the game. Enjoy, good luck!