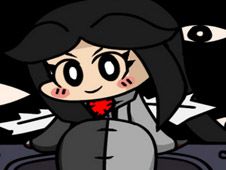 What is FNF vs Sheol?

Strange things happen around FNF's Boyfriend and Girlfriend all the time, just like right now, when the two of them were transported into a new world, a blank space with some floating islands all around you, and one of the people who first greeted you was Sheol, a tiny girl with big eyes who now challenged you to a rap battle, so give it your best to defeat her on the following songs:

Defeat Sheol in a rap battle to return home safely!

What you use in this sort of rhythm game are the arrow keys, having to press them at the same time as arrow symbols above BF match with one another, and if you keep this up until the song ends, the progress bar will have tilted towards you, and you will have won.

This also means that you need to always stay focused and make sure that you don't miss pressing too many keys one after another because if that happens you will immediately lose the battle!