Who Wants to Be a Millionaire 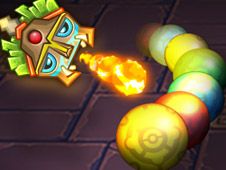 What is Totemia: Cursed Marbles?

We know that you have probably played Zuma Games online before, which should not be at all surprising, since they are some of the most widely known bubble shooting games for computers, browsers, or even mobile platforms, and we're very excited that right now in our category of MSN Games you get to play one of the best such games we've ever seen, a game called Totemia: Cursed Marbles!

Shoot the marbles and banish the curse away!

You will control the frog totem in the middle of each level, and along the path, there will be marbles coming, with you having to prevent them from reaching the other totem, the one at the end of the road, because if they eat up all the marbles, you lose.

To get rid of the marbles, shoot them so that you hit at least three identical marbles, or create a group of three, and when that happens, they break and are removed from the line.

Keep shooting the bubbles, match them, and eliminate them all from each level, no matter how complicated they might get further down the road. Use the mouse to aim and shoot the marbles.

It's all that simple, so start right now, enjoy this game as only here is possible, and make sure to stick around for all the fun still to come!