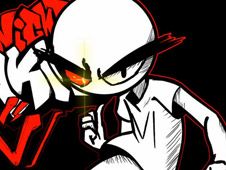 The latest FNF mod we are very happy to be able to share with you all right now and here for free is FNF vs 4chan /V/ week, where you duel against /v/, who is the founder and leader of 4chan, one of the biggest and craziest message boards on the internet, where lots of trolls exist, and you will now have to defeat this army of trolls through music, on the following custom songs of the week:

Overtake 4chan with the power of music!

You can duel this internet nerd in either the story mode or the free play mode, it is up to you, and what you have to do is press the arrow keys at the same time as the arrow symbols above BF match one another, and keep doing so until the end of the song in order to win.

Be careful about how you press the keys because if you miss doing it too many times in a row, you are going to lose and have to start all over again from scratch. Enjoy!