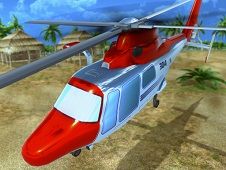 Simulators are very popular games on our site because by playing such a game you will be able to practice that activity just like in reality, in the smallest details. This time we propose a simulator with a helicopter that flies outdoors, on an island, and with which you will have to complete as many missions that you will receive in the game.

Complete the missions by piloting the helicopter in the simulator

As you can see, you are in a perfect simulator, in which you will not be able to tell the difference between reality or game. Your mission will be to fly as well and correctly as possible with this rescue helicopter in the places indicated in the game. To know where you need to go, you will need to look to the left of the game, where you have an arrow that tells you where to go. After reaching the tower that connects the earth with the sky, you will have to pick up the objects you have to transport, then go to the people waiting for you on the other side of the island. Be very careful when you travel this route.

Another important thing is the fuel level in the helicopter tank; here you will have to be careful because if you run out of kerosene in flight, the helicopter will crash and you will die.

W or Arrow up – Move Forward

S or Arrow down - Move Backward

A or Arrow Left – Steer Left

E – Tilt Right. Space – Land on Ground or Move Down

L-Shift – Take Off or Move Up.