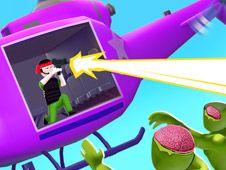 What is Helicopter Escape?

When you see a game such as Helicopter Escape, you would expect to become the pilot of the flying machine and try to run away from other aircraft, but this is far from being the case with this new addition over to our website, which is actually a really amazing shooting game 3d that even has aliens in it, so there are plenty of reasons why you should give it a chance!

Let's use the helicopter to escape!

It's usually a lady that is running on the rooftop of the building towards your helicopter, as she is being chased from all directions by nasty aliens, with your goal being to shoot them down before they can grab her because if you let that happen, you lose. Be extra careful of the ones with exclamation marks on top of them, they are the ones closest to your rescue target.

Use the mouse to aim and shoot your guns, earning points whenever you hit the aliens, even more so when doing double kills or going on killing sprees. Also, try hitting the explosive cans in red, since they explode and take out multiple targets at once. With the money, you earn you should buy better weapons or cool upgrades in further levels.

Let the fun begin right now, only here, and don't hesitate to invite your friends over for fun as well, they're going to love it!