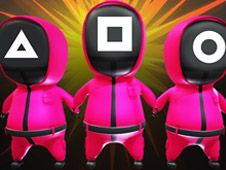 What is Squid Game: Bomb Bridge?

Well, the really exciting and dangerous game of glass bridge that had been featured in the Squid Game show on Netflix has now been reimagined and made even more dangerous and gruesome in the world of online gaming, as right now we invite you to play its more difficult virtual version, Bomb Bridge!

Cross the bridge without exploding!

The first awesome thing about this game that you need to know is that it can be played by two players at the same time, one of them running using the arrow keys, and the other one using the W, A, S, D keys. Each of them looks like a stickman wearing a green tracksuit.

There will be a bridge that both of you have to cross in a certain time limit, and it is made of multiple tiles, but some of them have bombs on them, bombs that explode immediately upon you stepping on them.

The game is all about luck, but each time you die, remember where it happened so that you can avoid that tile for the next time you undertake the race, and try your best to beat your opponent, either real or virtual. Good luck, and godspeed!