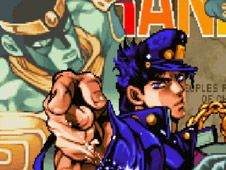 What is JoJo’s Bizarre Adventure (Arcade)?

One of the longest-running manga and anime series in Japan, and one that was a cult favorite for many years, and has become a popular series over the last years is Jojo's Bizzare Adventure (or old Joseph Joestar), which is also the name of this brand new game, a video game that now can be emulated directly on our website, so don't go looking for old consoles to play it, enjoy it anywhere and everywhere for free!

DIO has been revived, so come defeat him and his evil ways!

The game is set in Italy, just like the part of the manga that has been inspired by it, and you are going to help the Joestar protagonist defeat various foes all along the way, something that you do in what is called Stand Battles.

What are Stands? Stands are some form of spirits that embody various warriors, and these stands have all sorts of supernatural powers, and two stand-users will use their powers to fight one another.

In addition to Jotaro, you can also become Joseph, as these two members of the Joestar family will be at the center of the action. Use the keyboard to control your warriors, and get ready for action!