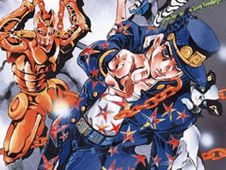 What is Jojo Heritage for the Future?

The Anime Games series of our website definitely needs more JOJO Games online, since Jojo's Bizzare Adventure is without a doubt one of the most popular series in that media, and the retro fighting games based on it we've had here so far had been received very well, so why would the same not be true right now for the one known as Heritage for the Future? Let's play it right now!

Win the battles to create a bright future!

While the game does have a story through which you progress, it is mainly a battle game, one where you help Jojo and his good guy and girl friends to defeat the forces of evil, fight after fight, so that the future will be left in good hands.

You will take part in battles of stands, with stands being supernatural beings that represent various characters in battle and are modeled after them, and can use all sorts of powers.

Win by depleting the health bar of the opponent first, simple as that. Move using the arrow keys, and perform various attacks by pressing the A, and S keys.

Start the action right now, don't miss out on the fun, and make sure to stick around for more awesome games to come!