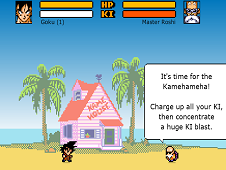 What is Dragon Ball Z Devolution?

Of all the Dragon Ball Z games you can play online for free, Dragon Ball Z Devolution is one you’ll spend plenty of time on. The 23rd World Martial Arts Tournament is coming to an end, and Goku must fight through a wave of familiar characters to come out the victor against his archenemy!

You also have the option to turn off the sound, music, or toggle the touchscreen.

Now that you have finished your settings, you can do either:

●    Training Mode: This is where you get to practice the controls. You will not have a lot of time to practice the controls. You will learn how to dash, block, attack, and unleash a charged attack.
●    Story Mode: In the Story Mode, you work your way up to fight your archenemy: the demon Piccolo. Once defeating Piccolo, you move on to fighting Goku’s brother: Raditz. You continue progressing through the story and having each character become available to you.

●    Start with the training option before you move on to the story mode. This is where you will learn how to do basic attacks.
●    Do not only try to unleash the charged attack. As strong as it is, there is no point in sitting in one place only to get hit by attacks while you are charging. Only charge for the big attack when you know you have some breathing room.
●    Do not forget to dash. It is easy to only get stuck on unleashing ki attacks, but if they are charging up for their big charge attack, you can break their charge by dashing at them.

It is time to become the strongest warrior on Earth!

Use the arrow keys and the C,X keys.