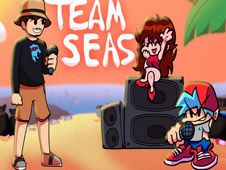 What is FNF vs MrBeast (TeamSeas)?

There's no way you have not already heard about Mr. Beast, the most popular YouTube figure of the last few years, who has finally arrived into the world of Friday Night Funkin', as he becomes the latest antagonist that you have to defeat, something that you will do on an original song based around him and his personality called 'BeastFunkin'.

Defeat Mr Beast and save the ocean by playing!

To win the game you need to reach the end of the songs, and to do that you have to play all the notes according to the charts, something for which you use arrow keys.

How? Well, you watch for the floating arrow symbols to match above BF's head, and at that moment press the identical arrow keys. Be careful not to miss doing it too many times, or you lose, which also happens if you hit too many trash notes, which need to be avoided.

Good luck, we wish you the best, and hope to see more of you here today, since fun won't be stopping here, you can bet on that!