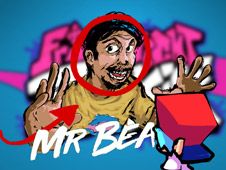 What is FNF vs MrBeast Meme Mod?

The MrBeast Meme Mod is a game where, as the title suggests, a meme version of the most popular YouTuber on the internet is going to be your musical rival, whom you have to defeat on the following four tracks:

Take on the MrBeast Meme in FNF!

Whether you will do it in the story mode or free play mode, make sure you reach the end of the songs by playing their notes according to the charts to win.

Do it by pressing arrow keys at the same time as the identical arrow symbols match above BF. Don't miss too many notes in a row, because if your health bar depletes, you lose. Good luck, enjoy!