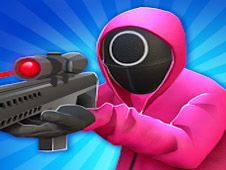 What is Squid Guard?

Squid Guard is an amazing 3d shooting game from the Squid Game category that brings you over to the other side of the protagonists because you won't be a green-tracksuit player wanting money, but, instead, you become the red guard who has to shoot them when they break the rules to Red Light, Green Light, so bring your sniper skills with you!

Shoot the players and be the best Squid Guard!

After the players have gotten the red light and stopped moving, some of them did not do it in time, so they will be highlighted in red. Use the mouse to aim and shoot them, and when they have all been brought down, the next round starts, and then repeat until the race finishes, and finish off all the players who did it wrong.

It's really that easy, and as big fans of this Netflix show, we are positive you will have tons of fun, otherwise, you would not have come over here in the first place. Let's begin, shall we?