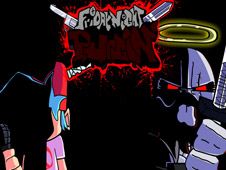 What is FNF vs Jebus – Friday Night Purgin’?

Jebus, the gangster Jesus from Madness Combat Games is making his return to FNF right now with the mod called Friday Night Purgin’, where you and BF will team up to beat him on the song called 'inundation'!

To achieve victory you need to reach the end of the song by playing all of your notes according to the charts, so when you see arrow symbols float and match above BF's head, press the identical arrow keys at the same time. Keep at it until the song ends, but know that you will lose if you miss hitting those notes too many times in a row. Good luck, enjoy!