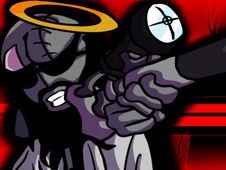 What is Friday Night Funkin Vs Jebus?

Jebus is the Jesus-inspired character from Madness Combat that you will now have to face off against in a rhythm battle, something that you will have tons of fun doing, no doubt, even more so since this is a mod that features two original songs dedicated for this character:

Show off your holy rhythm against Jebus!

Well, in this game you are going to be able to face off against this new character in either the story mode or the free play mode, with your goal being to play the notes of the songs according to the charts all the way up to the end of them, and then you win.

In these rhythm games, this is done using the arrow keys, keys that you have to press at the same time as the arrow symbols above BF match with one another.

Keep doing so until the end of the song if you want to win, but be careful not to miss too many notes in a row, since that happening means losing the game. Enjoy!