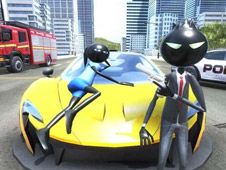 Amazing Crime Strange Stickman Rope Vice Vegas might be a mouthful of a title, but with so many interesting and fun elements in it, you can already tell that you will be having the best time possible, as we always guarantee when it comes to our never-ending stream of new GTA Games online for free, or at least those heavily inspired by the franchise, as this one is, where you will create chaos in the city of stickmen!

From the main menu you start off by choosing rendering options, your starting character is a suited mob stickman called Weared, or a robot-like one called Wear, your choice. Earn money to come back to the weapons menu and buy new guns, knives, swords, armor, grenades, and more weaponry and ammo.

Go around the city and do everything you want, such as stealing cars, robbing banks, making new girlfriends with your riches, using rope to fly around the city undetected, and make sure to never get caught by the stickman police, since they will surely go after you, and you don't want to end up in jail, right?

Use WASD to move around, the mouse to aim and shoot/attack, being even able to shoot laser beams out of your eyes, F to pick up items, space to jump, shift to run. Mayhem is one click away, so hit play, enter this new world of strange stickmen, and stick around to see what more fun content is still on its way!