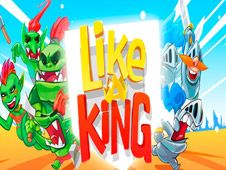 If you feel like a king, become one right now with one of the best new strategy and war games online on our website, which we highly recommend just like with any and all of our other games, so we hope that you're ready for all the action!

You will be the king of the blue territory, and your first war is against the red one, with both of you having neighboring kingdoms. Use the mouse to build gold mines, barracks, and other structures to develop, feed, and empower your army.

After you've built a path for your troops to take, attack the enemy kingdom and try destroying them and taking over their territory, and this way keeps expanding until you become not just a king, but an emperor who has taken over everything!

After every won battle, you receive chests and other treasures which we are sure you will properly use for further conquest and war. Let's begin right now, have the best time possible, and then check out more of our games to keep the fun going!