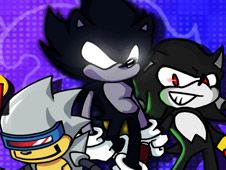 What is FNF vs Super Sonic Smackdown?

Waves of Sonics are fighting against BF in this new FNF mod called Super Sonic Smackdown, where right now we are positive you will be having an amazing time, just like we did, as you can see how awesome of a tracklist we have for you:

It's time for an FNF Super Sonic Smackdown!

Watch as arrow symbols match above BF's head, and when they do, press the identical arrow keys at the same time, something you need to keep on doing until the song's conclusion to win, otherwise you lose. Miss hitting the notes multiple times in a row, and you ruin the chart and lose. Good luck and win instead!