FNF: The Best Prank Ever vs Exposed Nerve

FNF Vs Meri (literally every fangirl ever) 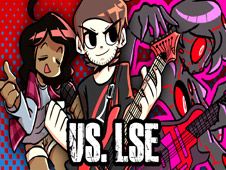 What is FNF vs Longest Solo Ever (LSE)?

Longest Solo Ever is the name of a really popular YouTube musician, one against whom you and BF will team up right now in an amazing rhythm battle with guitars, something that we invite you to do on the following full tracklist:

Complete the story mode first to unlock the songs from the free play mode, but know that whatever song you are playing, you need to reach the end of it to win, something that is done by hitting your notes according to the charts all the way up until that point.

To do it, press arrow keys at the same time as the identical arrow keys match above BF's head on the top right but know that if you miss doing it too many times in a row, you lose and have to start again from scratch. Good luck, enjoy!