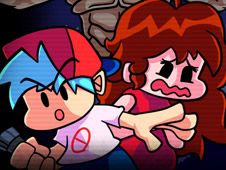 What is FNF vs Stranger Things?

Fight the Demagorgon and other monsters from Stranger Things using music in the world of FNF Games right now and here, something we are sure you will love doing as this show is more popular than ever with its fourth season just having aired, which is why we have so many awesome songs for you:

Whether you're playing in the story mode or free play mode, winning is achieved in the same way, by reaching the end of the songs, which is done by playing their notes according to the charts.

To do it, when arrow symbols match above BF, that is when you need to press the identical arrow keys. Don't miss doing it too many times in a row, or you lose and have to start again from scratch. Good luck, enjoy!