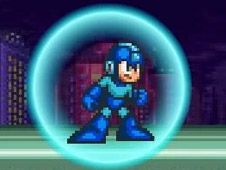 What is Megaman Polarity?

After a ship from the future came to DR. Light, he used its polarity powers to create a new version of Mega Man, giving him great new power of attack and defense as well, all of which you will test out and use in battles against enemies through five stages, each with a bigger objective for you to complete!

Use Polarity with Megaman and save the day!

Use the left and right keys to move the robot hero, up to jump, and space to fire the weapon at the current polarity that it is set at. After firing, hold down space in order to charge the Mega Buster, which you can take to up to three levels, and which will then fire when you release the key.

Switch the weapon and the polarity of the shield using the shift key. When you are set to BLUE polarity, everything that is red is dangerous, while blue energy is absorbed, and if you are equipped with the RED polarity, it's vice-versa.

Now that you know how to use the important new weapons of Mega Man, you are ready to defeat all the enemies, all the bosses in each level, and have incredible fun times as this category continues to provide you with!

Use the arrows, spacebar, shift key.