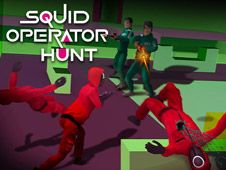 What is Squid Operator Hunt?

The Squid Game operators, or red guards, as they can also be known, have made quite a lot of enemies from former contestants, and one told the authorities about the secret island, so it's time to play the role of a soldier sent to it to deal with these enemies, as you have to shoot them down and eliminate them in order to clear the whole island of them!

It's time to start the Squid Operator Hunt online!

You are going to hunt Squid Operators through multiple levels, each one more difficult than the one before, doing it in various locations such as 1. The Dock, your first mission, where you have to shoot on sight all red guards you see. Other missions are:

Use the WASD keys to move, the spacebar to jump, shift to run, the mouse to aim and shoot guns, and R to reload ammo. Now that you've understood what your missions entail, we are sure that you will give it your best top to bottom, as with any other Squid Games online here, after which we hope you also share it with as many of your friends as possible!