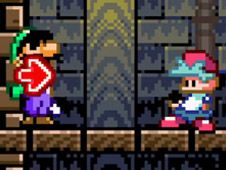 What is FNF Mario is Missing vs PS135?

Mario is Missing, so let's defeat FNF's PS135 to get him back!

After you've made your choice between the story mode and free play mode, in either case, give your best to reach the end of the songs by hitting their notes according to the charts, something that you do by pressing arrow keys at the same time as the identical arrow symbols match above BF.

Be careful not to miss hitting notes multiple times in a row, since that leads to you losing. Good luck, we wish you the best, and hope to see you around some more!