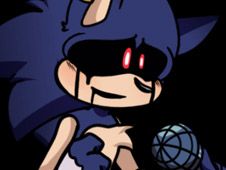 What is FNF vs Curse Sonic – Malediction?

A new Sonic.Exe variant called Cursed has appeared in the world of FNF Games, and only you and BF can defeat him, of course, which is what we invite you to do right now with this awesome song called 'Malediction'!

When you see arrow symbols match above BF's head, press the identical arrow keys to hit your notes, and keep on doing it until the song ends to win, while being careful not to miss hitting notes too many times in a row, since that leads to you losing and having to start again from scratch. Enjoy!