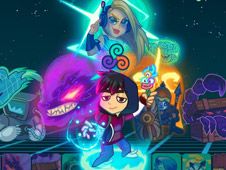 Magikmon is a game that you can already tell solely from the title, takes inspiration from Pokemon Games, which is great, and even better, it also has been inspired by the likes of Harry Potter, as we're talking about a game where magic is also involved in the raising of creatures and doing battle with them, and when something is magical, it can only be an amazing experience, even more so in the world of gaming!

Be the world's best Magikmon trainer!

Ander is the name of your character, and it is his first day at Ogdoad's Magical School, and guess what? He's already running late. Oh No! On his way to class, he already meets a magical creature that challenges him to a battle, otherwise, he can't get past it, so let's beat it, shall we?

Since he is a newbie, kicks and punches are all that he can use, so click on those buttons to attack, but as the fight seems to be lost from the start, hit the Escape button to run away. That is when the magical wand introduces itself, as the only help you need to go around these parts since you will be using it to cast spells and beat creatures like the one before.

Depending on your answer to the quick quiz, you get assigned a Magimon (magic+monster) by the wand. As you explore the world and keep winning battles, they evolve, and their stats (attack, defense, life, and aim) get better. To move around and take any action, use the mouse on PCs, and use the finger to tap on phones and tablets.

Now go and win your first Magikmon battle, get to class, and start your new life as a magic user, training, fighting, developing, and becoming the best of the students, and beyond!