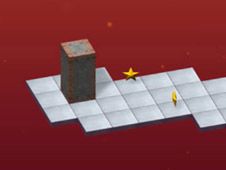 Welcome to Bloxorz 2, the sequel you were all waiting for if you love adventure games with puzzle-solving elements but also physics and logic ones all packaged in one amazing game, which is precisely why we offer you right now with this 3D one that does not only feature the levels in the Original world, but also a Winter world that you will be able to unlock after you finish the classic missions. Let's get on to it, shall we?

Have fun with Bloxorz 2 online unblocked!

The aim you have for each level is to get the block to fall into the hole at the end of the stages while making sure not to fall down from the edges of the courses. To move your block you use the arrow keys, obviously.

To lay down a bridge and be able to pass a hole with it you will first need to step down on the switches to press them. The soft ones, which are round, only need a slight touch but make sure to stand fully and upright on the heavy switches, which are shaped as an X, so that you can press them successfully.

The green and red squares will flash to show you which bridges are being operated, as activating switches make things behave differently depending on the course. Watch out for orange tiles, since standing on them is not good, as they are fragile and will make you fall down.

Know that the switches shaped as parentheses will teleport your block into a new location and split it up into two smaller blocks. Press the spacebar to switch between controlling one block or another after that happens, but know that when you reach the exit hole you will need to be a full block, so reunite, otherwise, you won't pass the level.

Now that the mechanics of this action-packed adventure-puzzle game in 3D with blocks had been explained, you should be ready to give the game your best and have incredible amounts of fun as only here is made possible!

Use the arrows and the spacebar.