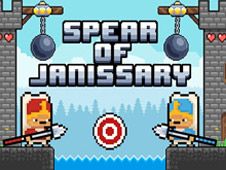 What is Spear of Janissary?

Spear of Janissary is about to be one of the best mobile 2 Player Games online you play here today for free and unblocked, with the game belonging to a bigger series where two players get to fight each other using one kind of weapon, and it is the time for spears today, which makes a lot of sense since these are ancient weapons that can be incredibly useful and fun to use!

Use the Spear of Janissary and win the battle!

If you choose the 2P mode, one of you uses W and the other one uses Up, and if you are playing on a phone or tablet, you can simply hold on your side of the screen, the left or right one, in order to aim the spear, releasing when you think it is at an angle you like and you want to make your shot.

The goal is simple: shoot spears across the screen and hit the opponent, defeating them as such, being faster and more precise to achieve that. To beat the opponent, you must take out all of their five lives first.

We wish both players good luck with this, and tons of fun, inviting them to play more games in this genre here, we certainly have the best of them prepared for you!