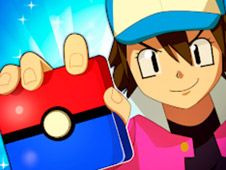 What is Battle Island?

Battle Island is a 3d action-adventure game with fighting, but not just any kind of fighting, but the one where you train your monster to do it for you, both against wild monsters or other trainers, making this one of the prime examples of what Pokemon Games have inspired over the years, which are certainly the main source for this one as well!

Step on Battle Island with courage and get ready for adventure!

The first monster you need to beat has Lvl. 1, and it looks like an egg. Move with WASD/ARROWS and then use the mouse to spawn your own monster to attack and defeat it.

You can spawn multiple monsters of the same kind and merge them with one another to create one of a higher level, which you should use to beat monsters with the same level or lower than you.

After you make your choices, start the fight, and always aim to use the best strategy towards winning the monster fights. Defeat one enemy after another until you raise your XP points and coins as high as possible, and travel the lands in search of new foes, new challenges, and more monsters to fight or maybe raise! Enjoy!

Use the WASD/ARROW keys and the mouse.