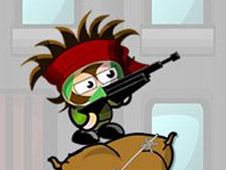 What is City Siege?

City Siege is a game that has action, shooting, fighting, and all sorts of other amazing elements that make this one of the must-play new games for boys online that we invite you to play right now and here free of charge, something we recommend after having had plenty of fun with it ourselves!

After finishing the three Training levels, you have a whole lot more of them to experience:

After the city was taken over by baddies, you need to stop them and reclaim the territory from their evil hands. Select units by clicking on them, and then move them using the WASD keys.

With the mouse, you then aim and shoot their guns, with the enemies only firing at you if they see you. Upgrade your troops by collecting stars, but make sure to prevent the loss of civilian life.

To complete a mission you need to save the VIPs, and make sure to be careful of explosive objects. Good luck and the best we wish you all, inviting you to stick around for way more fun to come, as always!

Use the mouse and the WASD keys.