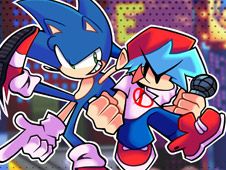 What is FNF VS Sonic Dash & Spin?

FNF Sonic Dash & Spin is the newest mod of our website to feature this speedster hedgehog character that so many of you love, and other ones from their universe as well, and you and Boyfriend will team up against him on all the following songs:

After making your choice between playing in the story mode or free play mode, in either case, give your best to reach the end of the songs, something that is done by hitting notes according to the charts until you reach that point.

So, when floating arrow symbols match above BF, you have to press the identical arrow keys. Missing doing it too many times in a row, you lose and have to start again from scratch. Enjoy!