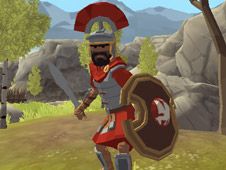 What is Black Soldier of Rome?

Black Soldier of Rome is a simulator game 3d online with adventure and action elements, fighting as well, as we're talking about a game where you become an African man who is also a gladiator for the Roman empire, sent out on a mission to defeat enemies, and since he is now the last one of his squad, he needs your help to complete it, instead of running away, which he would never do!

Lead the Black Soldier of Rome toward victory!

As you move into enemy territory, you need to defeat all the enemy soldiers you encounter in sword fights, or other kinds of weapons, in case you find and collect them.

Of course, you defeat enemy soldiers by attacking until their health bar is depleted, but if yours gets emptied out instead, you become the loser.

Start your Roman adventure right now, live like a soldier of the old days, and see what other great action games we have to offer you here, we're sure you will be delighted by what you find!

Use the WASD keys, shift key, the mouse.