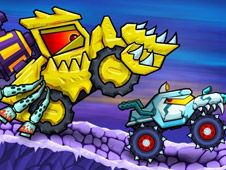 The Car Eats Car Games series returns right now with a new edition called Arctic Adventure, which has come just in time for the winter to set in, this new version is different from the previous one set in a similar climate, as this time you go where it is the coldest on all Earth, so of course that the car needs to eat other cars to survive, something you will attempt doing right now as well!

Let's have an Arctic Adventure with the Car Eats Car Games series!

Use the WASD keys to steer and brake, Z for turbo, and press space to drop bombs. That is how you control your monster car through the courses, with each new level featuring one more difficult and challenging, as well as more enemy cars for you to defeat and survive against.

As you move through the courses, try avoiding the obstacles and traps you encounter, grab new weapons and power-ups to take advantage of them, and shoot down the cars chasing you, as they want to eat you, and if they hit you too much, you might lose.

Are you up for it? Between levels, make upgrades in the garage with the rewards you've earned in return. Good luck, enjoy, and stick around, since more great games are still to come, and we would hate for you to miss out on them!

Use the arrows, Z and space keys.