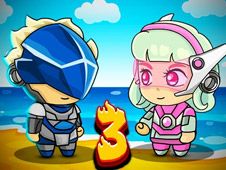 What is Metal Army War 3?

Metal Army War 3 is here because the previous two games of this series had been received very well, and we're not at all surprised, as we know very well that 2 player action and adventure games with shooting and fighting are already great on their own, even more so when they have futuristic soldiers, robots, aliens, and more foes and rivals of this kind!

Our heroes were vacationing when a new swarm of enemies descended upon Earth to destroy it, with vehicles as well, such as attack shuttles, AI robots, or even drones. Once again you need to defeat these enemies, avoid their traps, and rescue the hostages they have taken, achieving this only by working together.

Collect the metal items you find in the levels and use them for getting better equipment, upgrades, and weapons that you can take from the market. Here is how you control your two characters:

Great co-operation we wish for you both, since that is the key towards achieving your missions, and we're absolutely sure you will have a blast from start to finish, just like it had been the case for us as well!