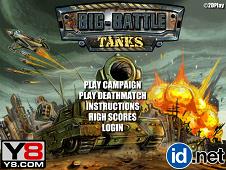 Tanks of new small game, but the gun power have very developed, which is why we invite you to be part of the missions that we have and also manage to shoot increasingly more such tanks. First you have to know that the game can be played in single player, two players or even in 3 players, so you'll be able to deal with all children who want to play this game with you once. The war begins once you're on top of the mountain and from there you set how to shoot your colored tank. Great care to enemies who are around you, tries to avoid and also to move your position so you do not catch you in the scale tank. For starters it is enough if you practice DEMO version of the game, then move to the real battle that will have to win at any cost so that you have enough money to improve your grades tank missions come for yourself and for men, soldiers and soldiers that you have in your crew military.

the arrows will have to drive tank and the SPACE to shoot.