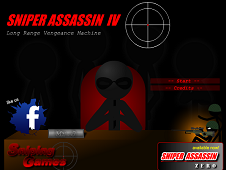 What is Sniper Assassin 4?

Sniper Assassin 4 is one of the greatest and the most adventurous games you've ever played in your life, and this game fits more than perfect in shooting category because it tests at maximum your shooting accuracy, shooting ability and shooting skills. An unknown man, who is a good husband in his free time and an ordinary civil is a dangerous, lethal and the most feared Assassin in the world! In this awesome game, this assassin gets a mission while he's spending time at home with her beloved wife and he goes fast to solve the emergency but he protects her wive by telling her that he has a work emergency. Actually he was announced that a robbery is on right now at a main bank from the city. You have to help this professional sniper by respecting the mission rules and killing the indicated people without including innocent people. If you accidentally kill an innocent man, you lose so watch out! Kill the robbers and then disappear in the shadow in order to remain a mysterious assassin. Respect all your tasks and finish this awesome game. Do not forget to use the mouse to shoot and good luck!