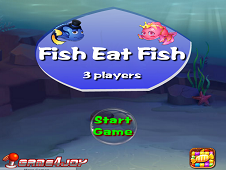 What is Fish Eat Fish 3 Players ?

We know that playing Fish Eat Fish with 3 Players all at once from the same computer is something that the huge fans of this series have wanted to do for a very long time, which is the reason why right now on our website they get to play exactly this kind of game, where you and two of your friends, or just one, depending on how you want to go about it, will go underwater, assume the avatars of fish, and have an all-out battle where only the most persistent one survives and becomes the top fish of the sea!

It's EAT OR BE EATEN with three fish and three players!

When it comes to 3 player games online, they usually each use a different set of controls for their avatars, and this is true right now as well, with them being:

Before you start the fish-out, each of the three players can pick one of the two avatars of fish, one male, one female, and you get to customize their colors and pick out of multiple ones, so choose the one you think you can recognize the best since it will help a lot if you can easily spot yourself while swimming.

As you swim around with your fish, plenty of other fish will be swimming around, only they will be NPCs, which means Non-Playable Characters. Yes, these fish are controlled by the computer, and they come not only in different colors and unique patterns but also sizes.

Look for fish that are smaller than you in order to eat them, which increases your score, and, of course, makes you bigger in turn, and know that size is key in the underwater world, so having a huge size allows you to survive more. Avoid the fish bigger than you, they will eat you, making you lose then and there!

The three fish in this game all compete with one another to see who can eat more fish than the other ones, grow bigger than the other competitors, and get more points since that is how you tally it up at the end. If you can eat the other real players and eliminate them, that is another way through which you can win.

The final one standing, with the biggest amount of points will become the king of fish, and we wish all the players attempting this good luck towards it, and definitely hope to see you compete against one another in more of our games with 3 players online, since we have made sure to gather the best of them on our website, all waiting to be played free of charge!