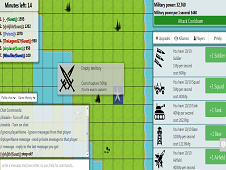 Bellum.io is just another fantastic online io multiplayer mission, where your goal is to use the mouse in order to extend your territory as much as it is possible in order to be the leader of this war, which brings you the best and the highest chances to win this war and conquer the whole territory but this is almost impossible, but if you know where to destroy and conquer and if you are able to do this, you are ready to be top of the ranking! Start with a little square, because the territory will be divided in so many square and each sqaure will represent a part of territory which you can build once. Build as many of them, investing money and experience and waiting for one to be ready for starting building another one, things which will require so many skills and pretty much ability. Do not forget that there will be opponents which will want your territories and they will attack you unexpected so you will get a notification so try to get back your territory by fighting and battles. Use your intelligence in order build up a perfect strategy for conquering it back and then, when you will get a perfect power and the integrity of your territory, you are ready to start attacking the other opponents for spreading your lands!