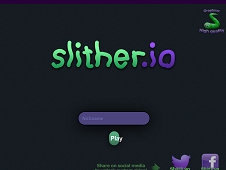 If you’ve ever played the old worm games on older phones, then you’ll already know the basics of Slither.io 2. Fortunately, you will not accidentally kill yourself by running into your own tail like in old worm games, but you will have to contend with other players. Slither.io 2 is only one of the fun lists of Io games you can play online for free.

There is not a tutorial to get you accustomed to the Slither.io game. You will simply be thrown into an arena with other players looking to create the longest snake in the game.

On the main menu, you choose your:

●    Snake color
●    A nickname that other players can see
●    The server that you want to play on. It should default to the best server for your region.
●    A place where you can spend your points for prizes. You earn points for the length of your snake, popping snacks, etc.

Now that you have chosen your color and your name, it is time to get thrust into an arena full of other snakes hungry to be the top player. Use the mouse or the directional pads on your keyboard to move and accelerate your snake.

Do not worry about hitting your own tail. It is a very simple game, but there are some tips to follow if you want to win!

●    Do not worry about going for the kill shots right away. You start off very small, and it’s easy to want to try to do a David and Goliath and try to take down the biggest snake in town, but the more you go for kills, the higher the chance one of the bigger snakes in the arena will simply wrap you up with nowhere to go.
●    Be careful about the edge of the arena. You can slither your way anywhere you want, but if you get cornered at the edge of the arena, then it is curtains for your snake.
●    Start the game by simply drifting around and collecting treats. It is easy to avoid the big snakes. Oftentimes, they will not even bother with you. Most players are as scared of you as you are of them.

Focusing on growing your Slither and the kills will come!