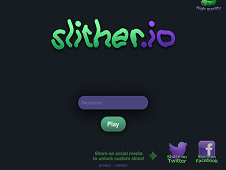 The gameplay for Slither.io is simple: Use the mouse or the directional keys to move the snake around, collect orbs, and try to take out other snakes.

Getting Started In Slither.io game

To get started in Slither.io, you will want to change the skin of your default snake or build a slither of your own. If you click on “Change Skin,” you’ll also see the option to build your slither. Create a snake with your favorite color or build, one you will want to see slithering across your screen for hours at a time.

Is Mouse Or Directional Pad Better For Movement?

In our opinion, you get a better reaction time when turning the snake with the mouse. The up and down arrows feel a little slower on the snake turns.

You cannot kill yourself. Unlike the old snake games, you can turn around and hit your own tail without dying. In fact, you’ll simply fly through your tail with no issues.
Worry about growth before killing. Don’t worry about scoring kills like a tiny snake. It might be tempting at first to try to kill someone if they’re not paying attention, but you might make a reckless mistake and get taken out by someone else in the process.
When you’re long enough to start killing, go for the small prey. Work your way up by taking out unsuspecting newbies. If your snake is long enough, you can encircle a smaller snake and trap it. The poor newbie snake will have nowhere to go.