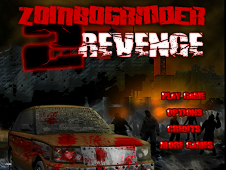 In Zombiegrinder 2 Revenge you have to grind so many zombies, undead creatures who have managed to take away every single spirit of humanity in this world and right now they are getting ready for a total controll over the world but not before this guy says his word! He still got his car, with the maximum amount of fuel and ready to crash so many zombies, slaughtering them and grinding them in little pieces. Make sure that you won't let a single zombie get away and esacape so kill them all, every single zombie you meet during your road next to this forest and watch out because once you've missed one, you can't turn around because it isn't allowed to drive backwards in this game. So many pits on the road will stop you from achieving your goal which consists of rezisting for as much as possible so make sure that you will avoid them in order to do not consume too much fuel and after this crash onto the zombies for extra points, but in the burrels too, which are explosive and the plast may produce such a huge damage among the zombies. At some point, your car will have no more powers but the effort is totally worthing! Good luck for the last time and crash them all!