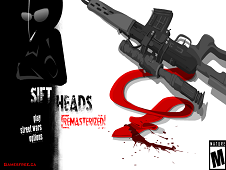 What is Sift Heads 1 Remasterized ?

Sift Heads 1 Remasterized is such a great killing game, where you have to use the mouse in order to shoot all the opponents as soon as it is possible, before you run out of time and of course, until your ammo is wasted. The goal is to follow each instruction you get, which are actually some important tasks which must be accomplished from your employer so do not blow it because a single mistake will make you be useless for the one who hired you. Everybody in Mafia wolrd knows your incredible shooting skills and abilities so that's why you are the chosen one. In a world full of stickmen, shoot the one that are necessary to get killed and you will figure it out who are those ones, using your logic and insight. For example, in the first task of the mission, you have to kill the one who makes business in the Red Mafia's zone, despite of the fact that he is from the Gray Mafia. Figure it out who is that one and shoot it in the head, without hurting citizen. Good luck and then try to defend from their revenge, shooting them on the road, from your car, with a deagle. As you advance in levels, there will be more and more powerful guns offered to you!