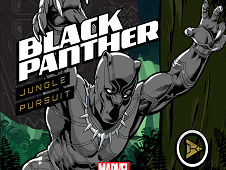 What is Black Panther Jungle Pursuit?

The incredible Marvel series has just released and brought to you this cool and so incredible adventure, ability and action game, alongside one of the most famous and still so powerful heroes from its series and world, Black Panther! Black Panther is a half human half panther, who's got the look of a human but definitely the agility, ability, dexterity and flexibility of a panther, a dark one from the darkest jungles in the world. He must be known by you from the uncountable comics episodes he appeared in during the time, however, join him right now and start this pursuit jungle mission now. Use the arrow keys in order to run from one side to another, switching the direction all the time when it's needed and also jumping up, on the platforms when it's required too. Good luck and pay close attention to each detail, using the SPACE bar for hitting and attacking with your claw the opponents from there, rescuing the hostages from the fury of the bad guys and kill them with the fury of your claw, because this is the main power of Black Panther. Do not fall in the pits and collect every chip!