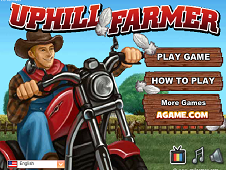 What is Uphill Farmer ?

This farmer is so fed up with feeding animals, harvesting and planting different vegetables and then waiting til the crop time arrived. A lot of people told him that this is, basically, the job of a farmer but these things not even touched our hero, who has bigger plans. He has just grabbed his bike, such a powerful riding bike and now he has so many plans to climbing those hills, full of money which must be collected. Let's collect the money as soon as it is possible, and then continue your road to the end of the level. There are some checkpoints, shown to you as some flags on the map in the bottom side of the game screen and there are also some traps, which are actually some sheep. Avoid getting in touch with the sheep because they are lethal for you so you have to restart the whole level after touching them. Climb uphill and collect the amount of money required from each task and avoid falling down and turning around with the bike because it is almost impossible to keep the balance alright on those hills, with this pretty heavy bike. Good luck and let's make it happen right now, becoming a legend among the farmers from all over the world. Complete each level and do some tricks for additional points!