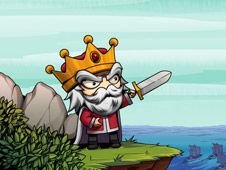 What is Raid Heroes: Sword and Magic?

The Raid Heroes Games series continues right now with the Sword and Magic version, so if you love battle, action, strategy, cards, and io games in general, this one is for you, and we recommend you try it out even if you've not played the previous version, as it still remains quite an awesome experience for you to have!

Choose your name, and one of the three starter heroes, each with their own ability:

Rogues are attacking the kingdom, and it is only your leadership in battles that will turn the tide and banish away the evildoers, protecting the people in your city.

Use the mouse to take action in battles, placing soldiers in the available units to intercept the oncoming waves of attackers, and, hopefully, defeat them in battle.

Upon doing so, if you win, you get rewards and resources, which you should invest in your heroes to make them stronger, as well as strengthen the defenses of your city.

Keep improving your army and add more units to it fight after fight, because enemies also get stronger, and you will need to give your absolute best to defeat them. Good luck, and we wish you only victory and glory in all your upcoming battles in a world of magic and weapons!