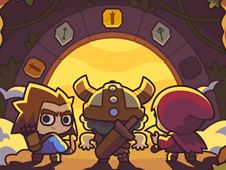 What is Raid Heroes: Total War?

Raid Heroes: Total War is a brand new strategy, war, and tower defense game all-in-one, with clicker and idle elements at the same time, set in a medieval world where the humans are fighting against the orcs and various other creatures, so it will be only your brilliance that will help the human race overcome this fantasy threat!

Become the Raid Heroes that win the Total War!

In each fight you take part in you need to position your hero in the correct spot so that when the fight begins, it overpowers the enemy orcs. As you win battles you get to gather and place more troops in addition to your hero avatar, which is great, as the enemy forces will also grow in size battle after battle.

The warriors you will be able to place on the battlefield can also have various classes, meaning different abilities and ways of attacking and defending. Make sure to upgrade your heroes and make them stronger for the upcoming battles.

You should also go on various quests to grow in power, enhance your castle, and buy upgrades, weaponry, and cool new stuff from the shop which will help you turn the tide of any fight!

This new world of fighting, strategy, and human vs orc war awaits you one click away, so don't miss out on the chance of playing this game right now for anything in the world, you will regret it otherwise!