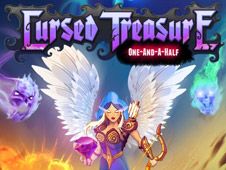 What is Cursed Treasure One-and-a-Half?

Cursed Treasure returns with the One-and-a-Half version, which is actually newer than some versions of this action-adventure game that have a higher number in their title, and we're very glad to have this chance of sharing it with you all, knowing just how much fun it can provide after we've played it and enjoyed it through and through!

First things first, know that the game has a total of fifteen levels for you to play and pass through, and you will see that they increase in difficulty, but also in entertainment value.

To complete one of these missions you have to survive all the waves of enemies and remain with at least one gem in your treasure chest because if you run out of them all, you lose.

Along the road, you need to build towers that will then automatically shoot at enemies. Select one from the list and then place it on an empty tile. There is also a logic to building:

On the high ground you can build any kind of tower, and if you want some extra mana, make sure to build new vapors. You can also get extra help by casting spells, such as:

Now that you know the mechanics of this amazing new tower defense game for the ages, playable on mobile devices too, make sure to give it a go and see for yourself why it's a hit!