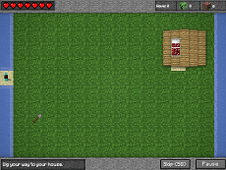 What is Minecraft Tower Defense?

Minecraft Tower Defense is a strategy game where you have to concentrate to demonstrate that you are able to make your plan and organize yourself well enough to defend the invasion tower scary monsters who want to destroy all that come in which. Minecraft Tower Defense is a game in which you use the mouse to use all the game modes that we offer, such as blocking walls or stretching of monster traps that kill them or just slow them down. That's your mission to prove you're a consummate strategist who knows how to put his plan to, without having to be afraid of anyone. Depending on how much you resist that tower without monsters to reach you, you will be awarded points. Monsters come in stages, which are called WAVES. The more you move the more WAVES, the difficulty will increase and will become increasingly impossible task. Focus to try to kick you and why not, to occupy the top one the best strategist in the hierarchy of the site. The game has an interesting plot, standard game Minecraft world is built from cubes of green and brown, made â€‹â€‹of different materials: wood, metal, earth etc. Focus on what you do and do not disappoint. Success!