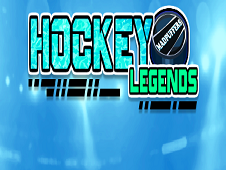 What is Hockey Legends?

Hockey Legends is a fun hockey game that can be played alone or with one of your friends. The game is quite fun and competitive and it can be played in different modes: tournament, friendly match or training. You will move your character with the WASD keys, use your dash power by hitting D two times in a row, shoot with L and use your special ability with K. If you play with a friend, he will be using the arrow keys in order to move and he will need to press two times in a row the right arrow in order to dash. He will shoot with the X shot and will use his special ability with Z. The game also has a background sound that is exactly like the ones from the real hockey matches. You will also hear a special sound whenever you score a goal or you receive one. You will win the game if you score more goals than your opponent before the time is over. Try to hit your opponent using the dash ability or using the shot one. Sometimes you will need to fight your opponent in order to win the ball and you will do that by using the controls shown on the screen.